Since August 2021 (when the UK energy crisis kicked off)

* Note. This may not sound like much but it means that more than half of all UK energy supply companies have gone bust in the last year.

The saga of the largest energy supplier failure of 2021 (actually the largest UK energy supplier failure ever) is drawing to a close. It has been announced that Octopus Energy has reached a deal with the Special Administrators will acquire Bulb Energy for an undisclosed sum. That sum is rumoured to be between £100 and £200 million + a share of any profits that Octopus make from the deal over the next 4 years. The transaction is scheduled to complete in mid Nov 2022. From that point onwards, Bulb Energy customers will be transferred over to Octopus.

UK Energy Incubator Hub Limited (UKEIH) has had its remaining 3,000 customers accounts transferred to Octopus Energy. UKEIH operates under the under the 2 brands of Neo Energy and Northumbria Energy. Technically, this is not an energy supplier failure in the traditional sense, since the company has not ceased trading. Instead, it is the first order made under the new ongoing “fit and proper” requirement for energy suppliers. However, since it means that UK Energy Incubator Hub can no longer operate as an energy supplier it has the same effect from a customer persective. Therefore it is included here.

Together Energy (Retail) Limited, and its subsidiary Bristol Energy, have both ceased trading. That adds another 176,000 to the number of displaced energy consumers, making 4.44m since Jan 2021.

This follows on from the largest failure of last year, which was Bulb Energy. Bulb Energy, the 7th largest energy supplier with around 1.76 million customers, has gone into Special Administration. Taxpayers are on the hook for up to £2.2 billion to see Bulb just through the winter of 2021/2022. To learn more about why Bulb didn’t make it, take a look at Bulb Energy Financials.

In the table below we show a complete list of all domestic energy suppliers that have gone bust since November 2016.

While the number of energy suppliers now left is less than the number that failed in 2021, it does not mean that we are out of the woods yet. We expect more energy suppliers will go bust before the winter is out. Some gloom and doomsters have predicted that all but 12 energy suppliers will be left once we are out of this train wreck. We were not quite so pessimistic. But only becaue we expected government would step in with bailouts if that looked likely. However, (not for) Business Secretary Kwasi Kwarteng has made it clear that the energy price cap will not be adjusted before 1 Apil 2022. Which means that, until then, energy suppliers are expected to incur huge losses supplying subsidised energy to consumers; something that they simply cannot afford.

It’s an ugly picture. However, with the next review of the energy price cap fast approaching, some relief for energy suppliers, in the form of much higher energy bills for consumers, is coming.

Some of the energy suppliers appointed by Ofgem to rescue “failed suppliers” have now gone bust themselves. Indeed, some poor customers will now have been with 2 or 3 failed suppliers.

Full list of energy suppliers that have gone bust

On this page we provide a complete list of all domestic energy suppliers that have gone bust since November 2016.  This is shown in the Table below. The table is updated regularly, as soon as new information becomes available.. Please check back regularly (if you’re into that sort of thing). Or follow us on Twitter Follow @_energyscannerand pick up the info as soon as it breaks.

Some energy suppliers have managed to exit without going bust. These exits, usually a trade sale of the business or the customer base, are summarised in a separate table (also below).

While the recent flood of energy supplier bankruptcies has been triggered by the current energy crisis, and crystallised by the energy price cap, Ofgem’s laid back approach to energy supplier market entry really hasn’t helped any. Just saying…

Data sources on energy companies that have gone bust

The new supplier column shows the energy supplier appointed by Ofgem to take over the failed supplier’s customer base. This is undertaken under the SOLR (Supplier of Last Resort) provisions.

Energy suppliers withdrawing from the market

For the record, here is a list of energy suppliers who have exited the market in a more orderly way (without crashing and burning).

Yorkshire Energy ceased trading on 2 Dec 2020.  The company that actually went into administration is called Daisy Energy Supply Limited – don’t ask. Yorkshire Energy was a trading name. It was the fourth domestic energy supplier to go bust in 2020.

The now bust energy supplier had approximately 74,000 domestic customer accounts. These were moved over to ScottishPower. Scottish Power did not publicly announce which tariffs these customers landed on.

What caused Yorkshire Energy to crash and burn?

“Yorkshire Energy were making decent progress and seemed to know what they were doing – by energy supplier standards anyway which, to be fair, aren’t particularly demanding. They even managed to get decent customer service reviews. At the point of failing, their revenue run rate would have been around £60m per annum.”

According to the latest published financials statements of Yorkshire Energy (Daisy Energy Supply Limited). In the year ended 31 March 2019;

Why pay more for the same energy?

Find and switch to a better deal in minutes. 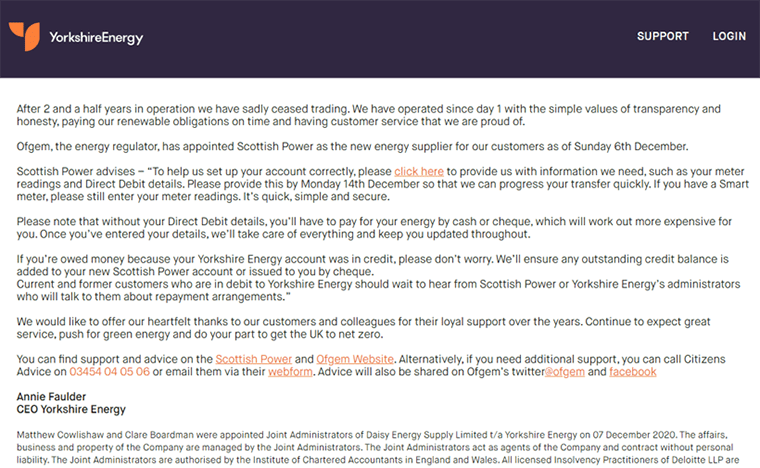 And here is the sorry story in pictures….in reverse chronological order. 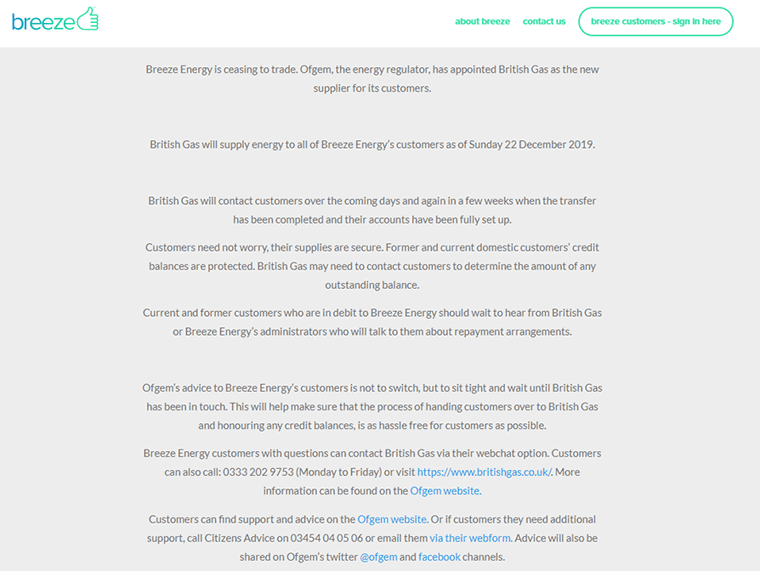 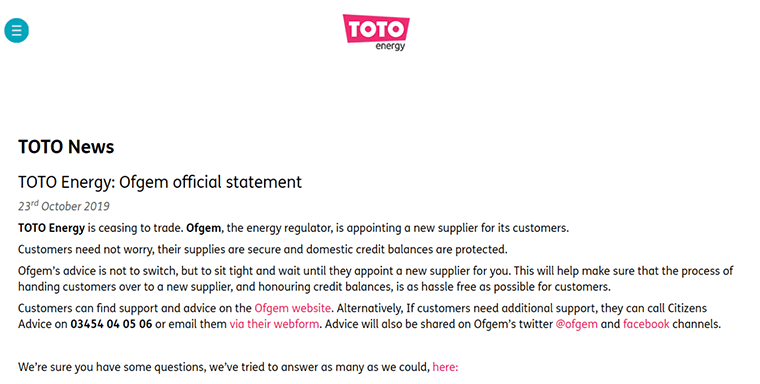 Eversmart Energy seem to have been so keen to exit the market they haven’t even bothered to keep their website live. Anyone who was with Eversmart Energy and needs to contact them well, I’m afraid you are all out of luck.

If you were an Eversmart Energy customer and don’t like the Utilita deal you’ve been offered….

…. pop your postcode into the box below to check online. 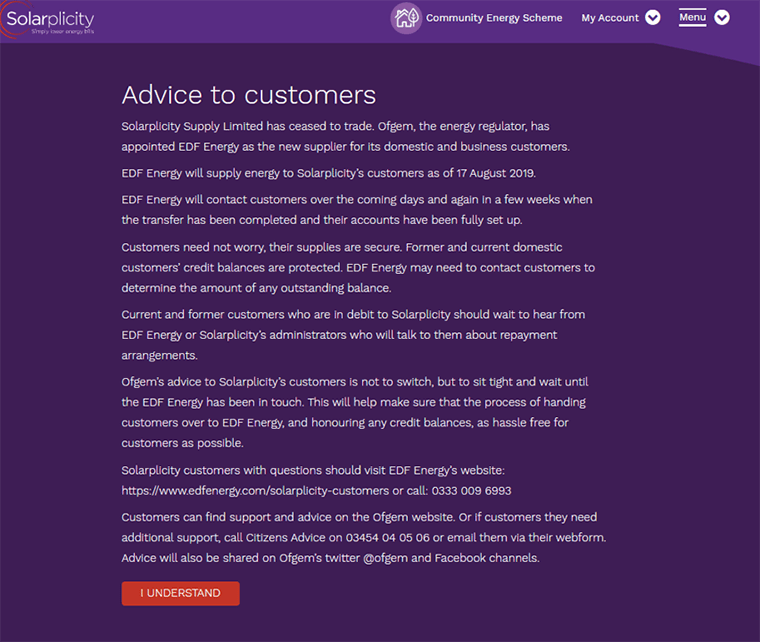 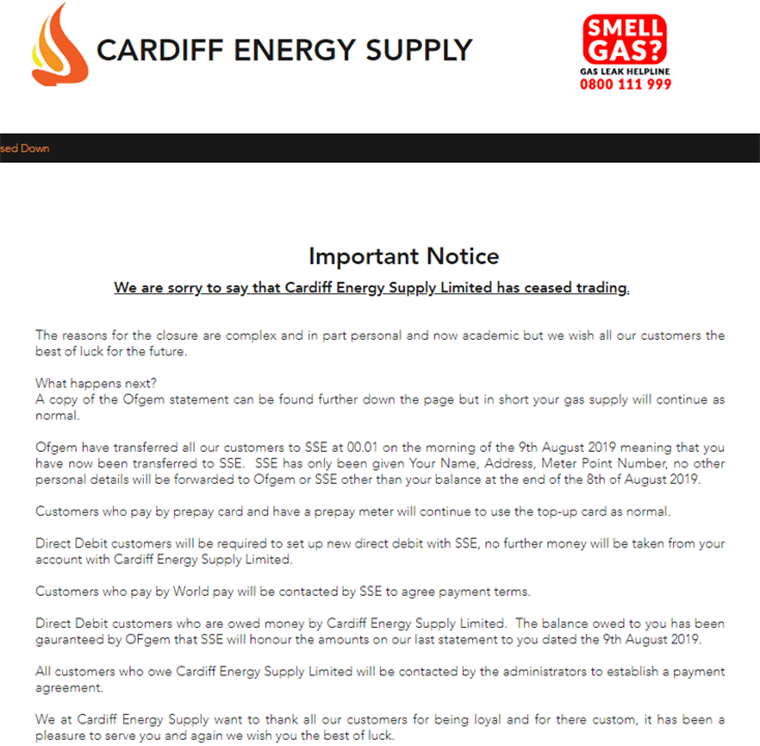 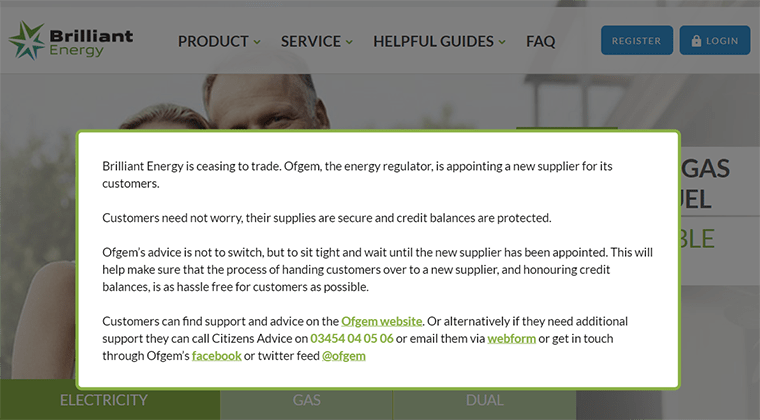 Millions of pounds of public funds were wasted on this doomed venture. 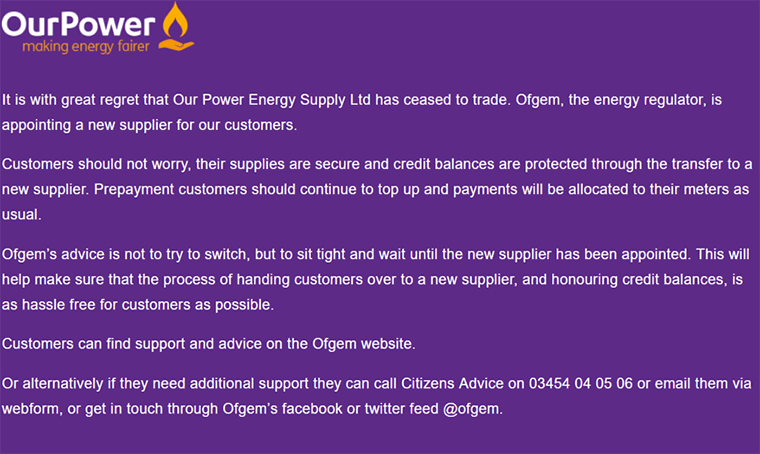 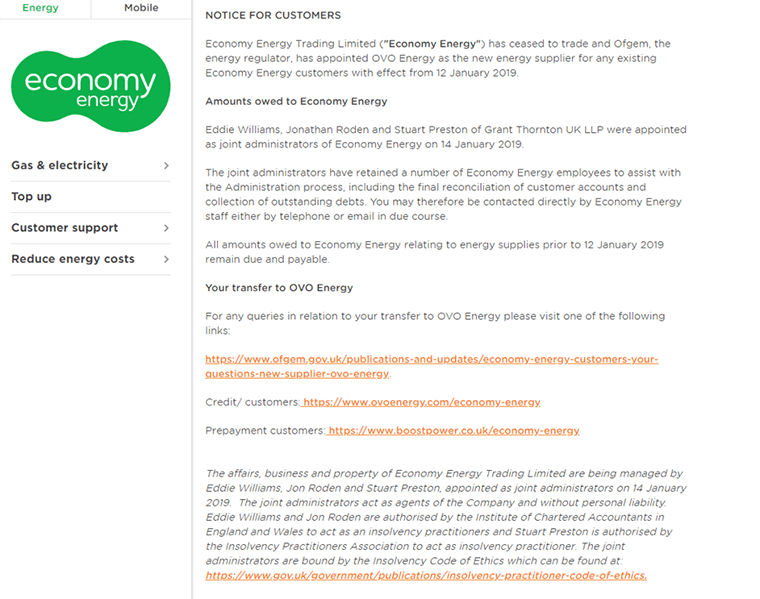 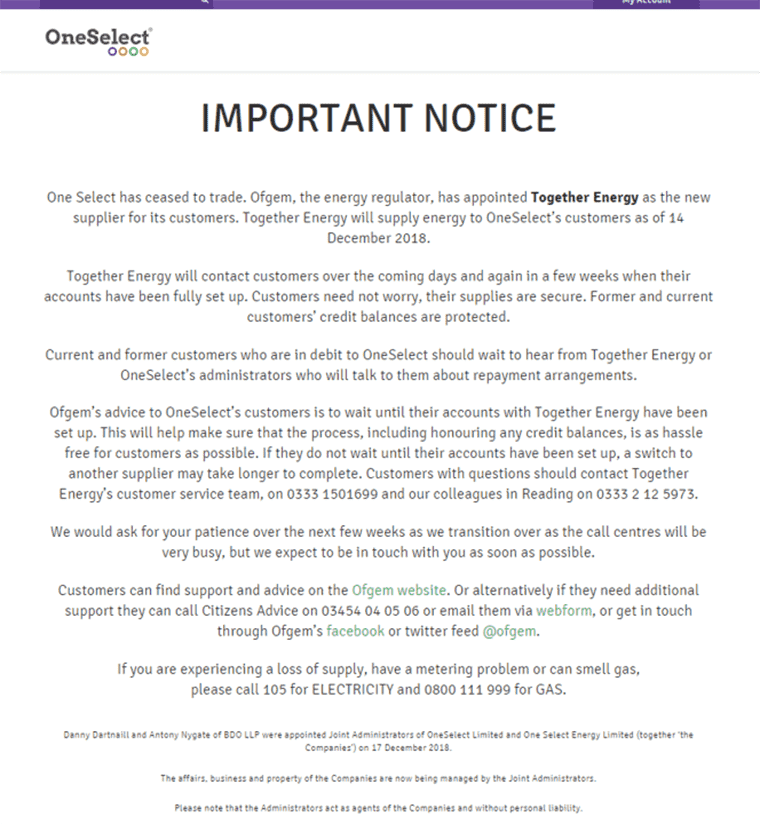 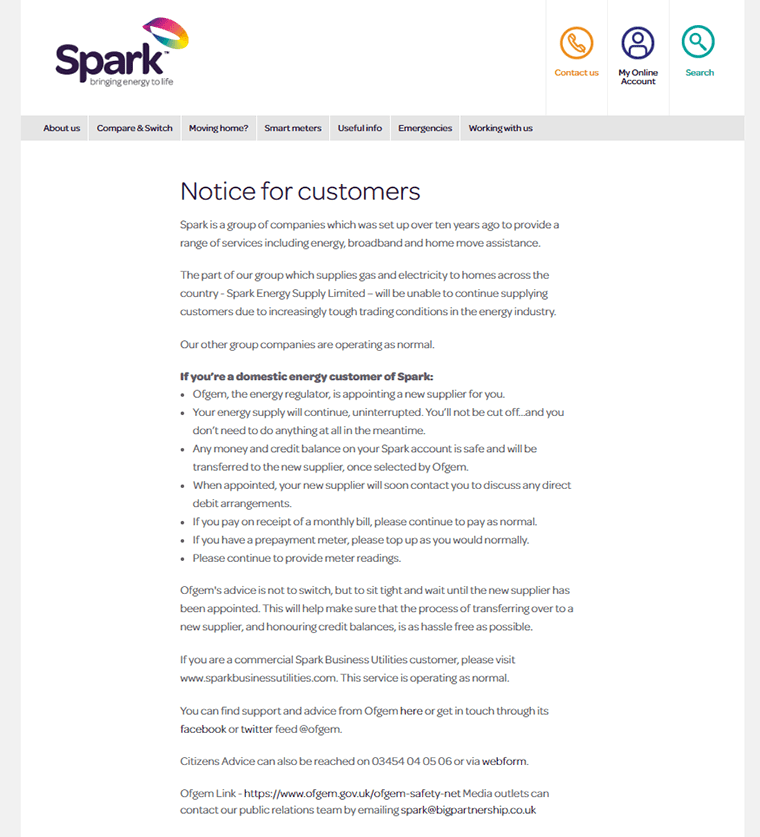 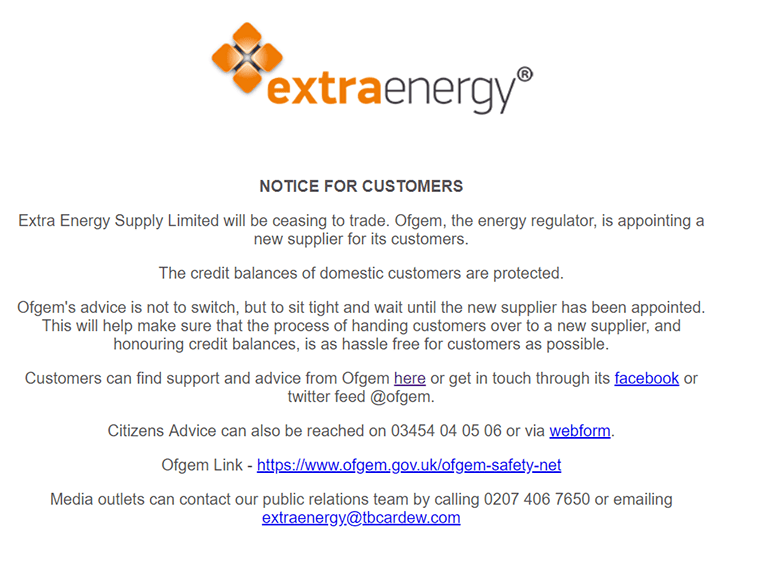 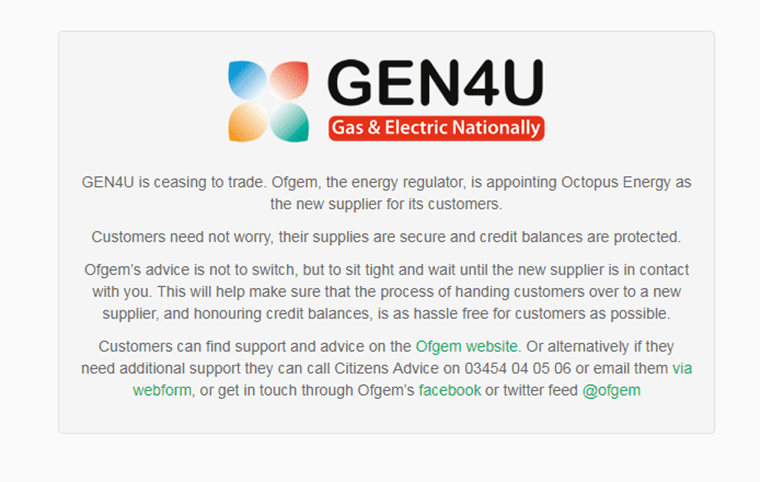 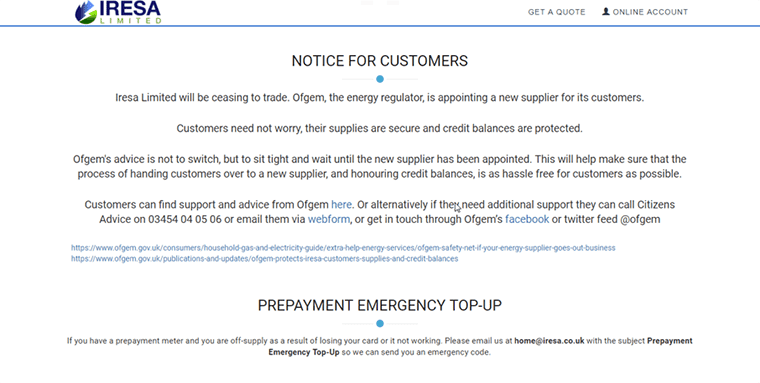 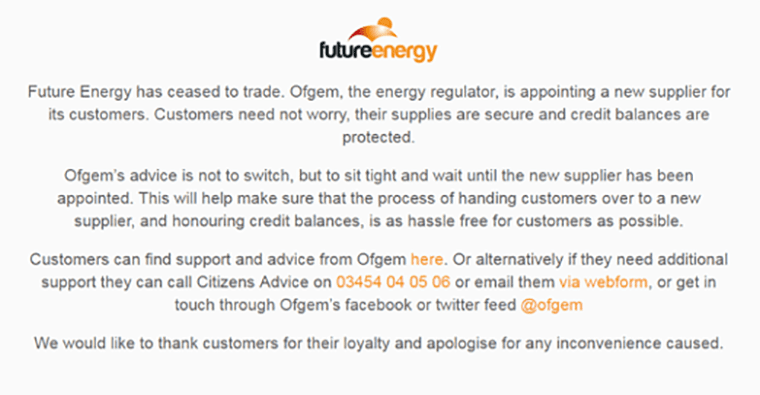 GB Energy Supply spectacularly imploded in November 2016. It was the first of the failures of the group of domestic energy suppliers that entered the UK energy market under Ofgem rules which allowed energy suppliers to get a license with little if any capital, and with no relevant industry experience. 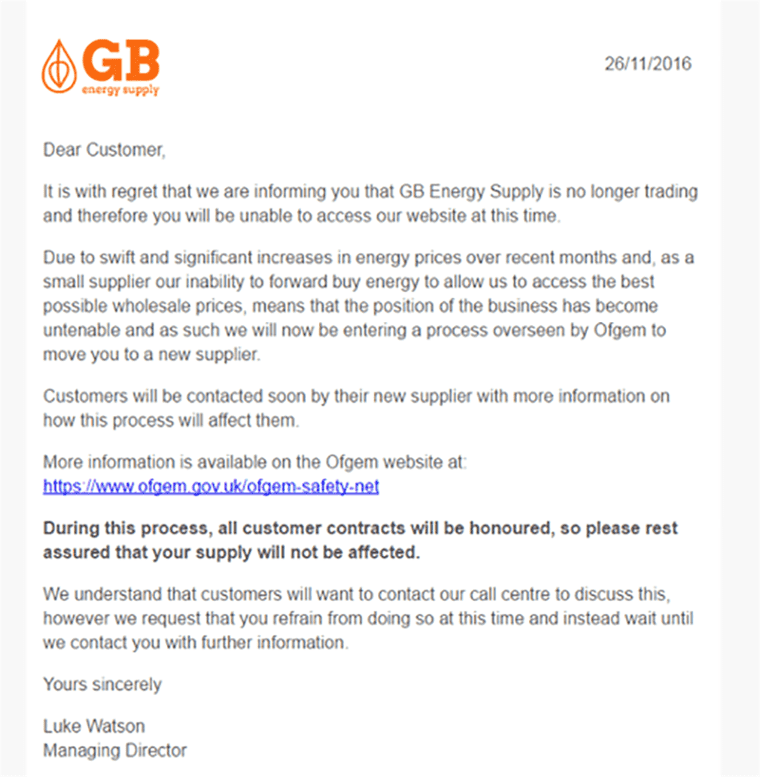 That’s all for now. More to follow we’re sure.

Remember, you do not have to accept any new energy deal you are offered by the new supplier who takes over your supply. What you absolutely should do is a comparison to see how that deal stacks up. If necessary, leg it out of there. Pop your postcode into the box below to check online.

– What to do if your energy supplier goes bust

10 thoughts on "Which energy suppliers have gone bust?"

This site uses cookies to help make the experience better for you. By continuing to use the site we'll assume that you're cool with this. Learn more.